An Overview of RNN

Recurrent Neural Networks (RNN) are another specialized scheme of Neural Network Architectures. RNNs are particularly tuned for time-series or sequential tasks, they are developed to solve learning problems where information about the past (i.e., past instances/ events) are directly linked to making future predictions. Such sequential examples play-up frequently in many real-world tasks such as language modelling where the previous words in the sentence are used to determine what the next word will be. Also in stock market prediction, the last hour/day/week’s stock prices define the future stock movement.

In a sequential problem, there is a looping or feedback framework that connects the output of one sequence to the input of the next sequence. RNNs are ideal for processing 1-Dimensional sequential data, unlike the grid-like 2-Dimensional image data in Convolutional Neural Networks.

This feedback framework enables the network to incorporate information from past sequences or from time-dependent datasets when making a prediction. In this section, we will cover the broad conceptual overview of Recurrent Neural Networks and in particular, the Long Short-Term Memory RNN variant which is the state-of-the-art technique for various sequential problems such as image captioning, stock market prediction, machine translation, and text classification.

The first building block of the RNN is the Recurrent neuron. The neurons of the recurrent network are quite different from those of other neural network architectures. The key difference here is that the Recurrent neuron maintains a memory or a state from past computations. It does this by taking as input the output of the previous instance, in addition to its current input at a particular instance . 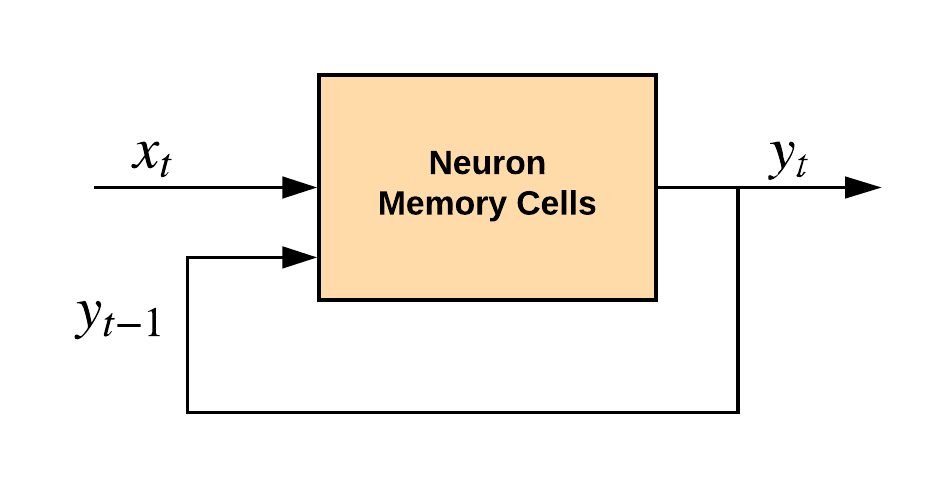 From the above image, the recurrent neuron stands in contrast with neurons of the MLP and CNN architectures because instead of transferring a hierarchy of information across the network from one neuron to the other, data is looped back into the same neuron at every new time instance. A time instance can also mean a new sequence.

Similar to other neurons, the recurrent neuron also injects non-linearity into the network by passing its weighted sums or affine transformations through a non-linear activation function. 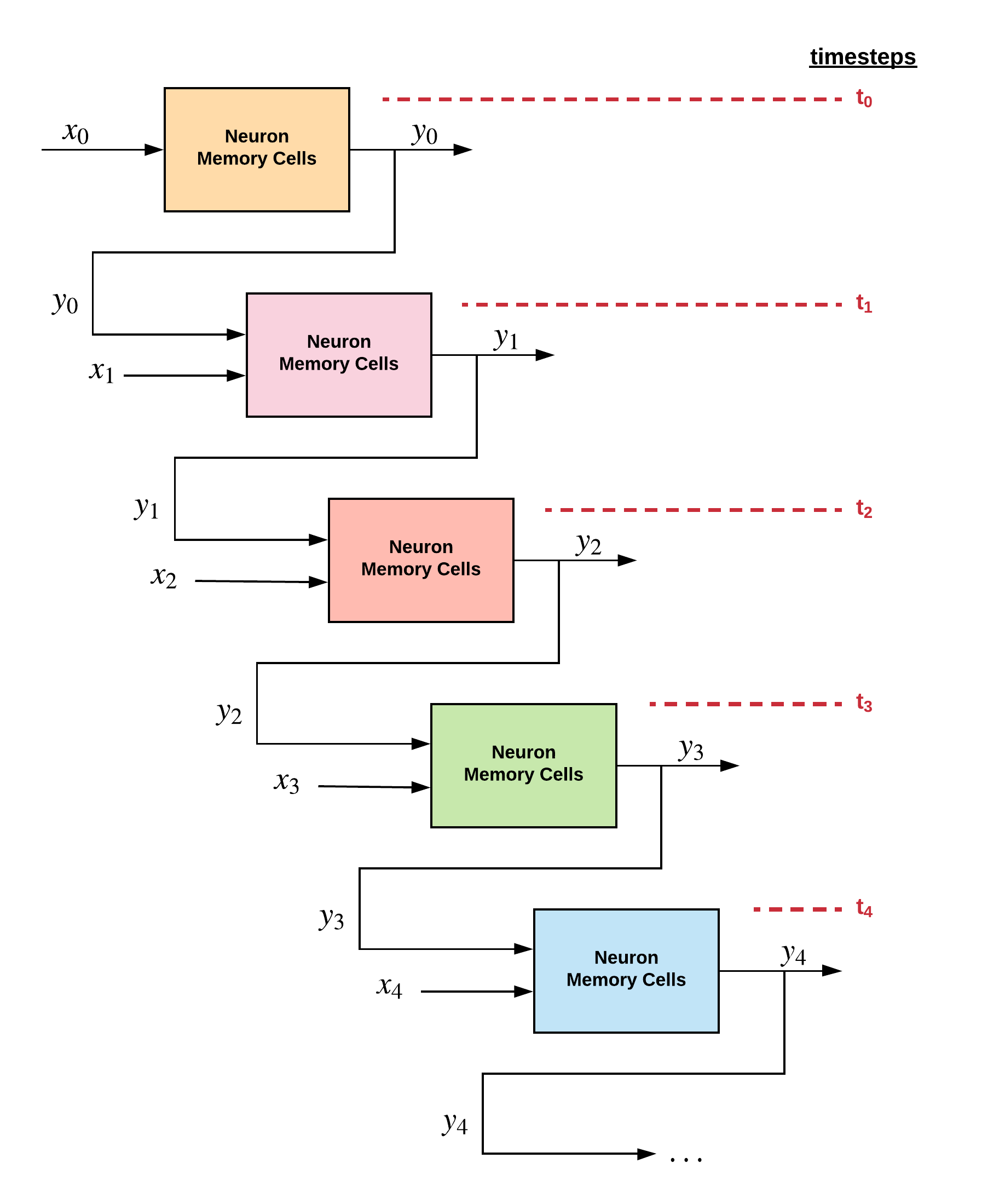 Up until now, we have noticed that the recurrent neuron captures information from the past, by storing memory or state in its memory cell. The recurrent neuron can have a much more complicated memory cell (such as the GRU or LSTM cell) than the basic RNN cell as illustrated in the images so far, where the output at time instance holds the memory.

At this point, we must firmly draw attention to the fact that the recurrent layer does not comprise of just one neuron cell, but it is rather a set of neurons or neuron cells. The choice of the number of neurons in a recurrent layer is a design decision when composing the network architecture.

Figure 5: Neurons in a recurrent layer.

Each neuron in a recurrent layer receives as input the output of the previous layer, and it’s current input. Hence, the neurons each have two weight vectors. Again, just like other neurons, they perform an affine transformation of the inputs and pass it through a non-linear activation function (usually the hyperbolic tangent, tanh). Still, within the recurrent layer, the output of the neurons are moved to a dense or fully connected layer with a softmax activation function for outputting the class probabilities. This operation is illustrated below: 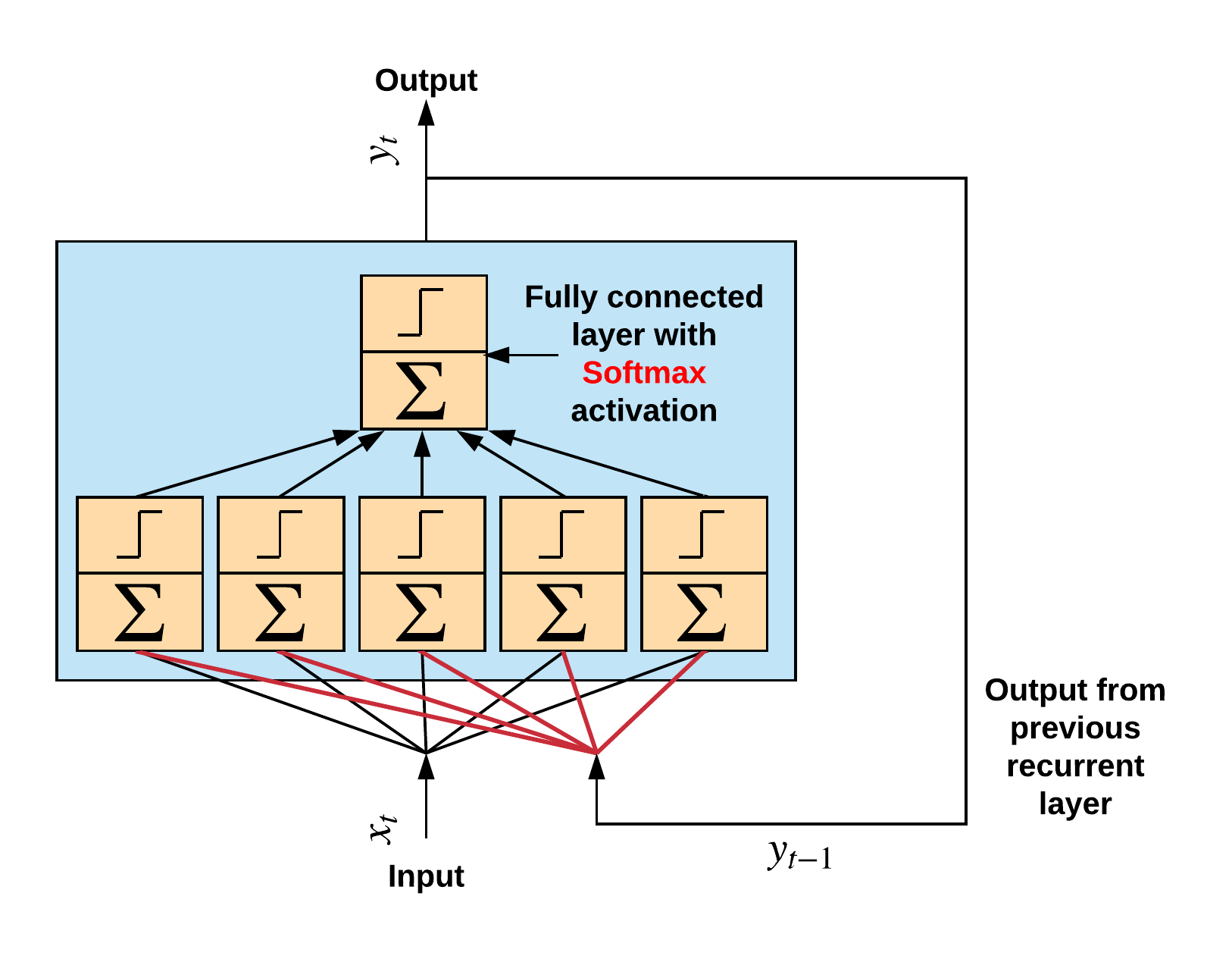 Figure 6: Computations within a Recurrent Layer. 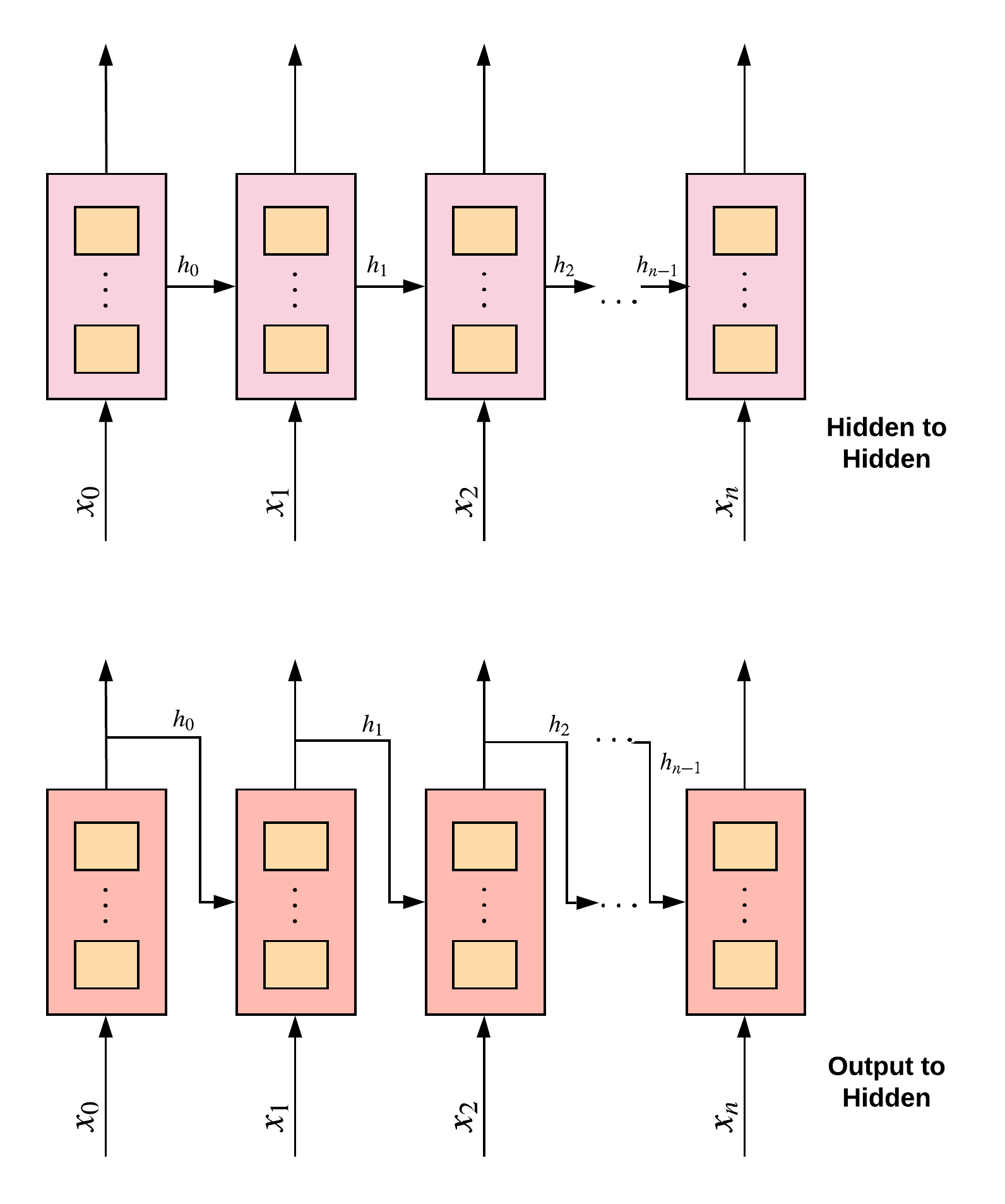 Due to the architectural loop or recurrent structure of the recurrent network, vanilla Backpropagation as-is cannot work. Training a network using backpropagation involves calculating the error-gradient, moving backward from the output layer through the hidden layers of the network and adjusting the network weights. But this operation cannot work in the Recurrent neuron because we have just one neural cell with recurrent connections to itself.

So in order to train the Recurrent network using Backpropagation, we unroll the Recurrent neuron across the time instances and apply backpropagation to the unrolled neurons at each time layer the same way it is done for a traditional feedforward neural network. This operation is further illustrated in the image below. 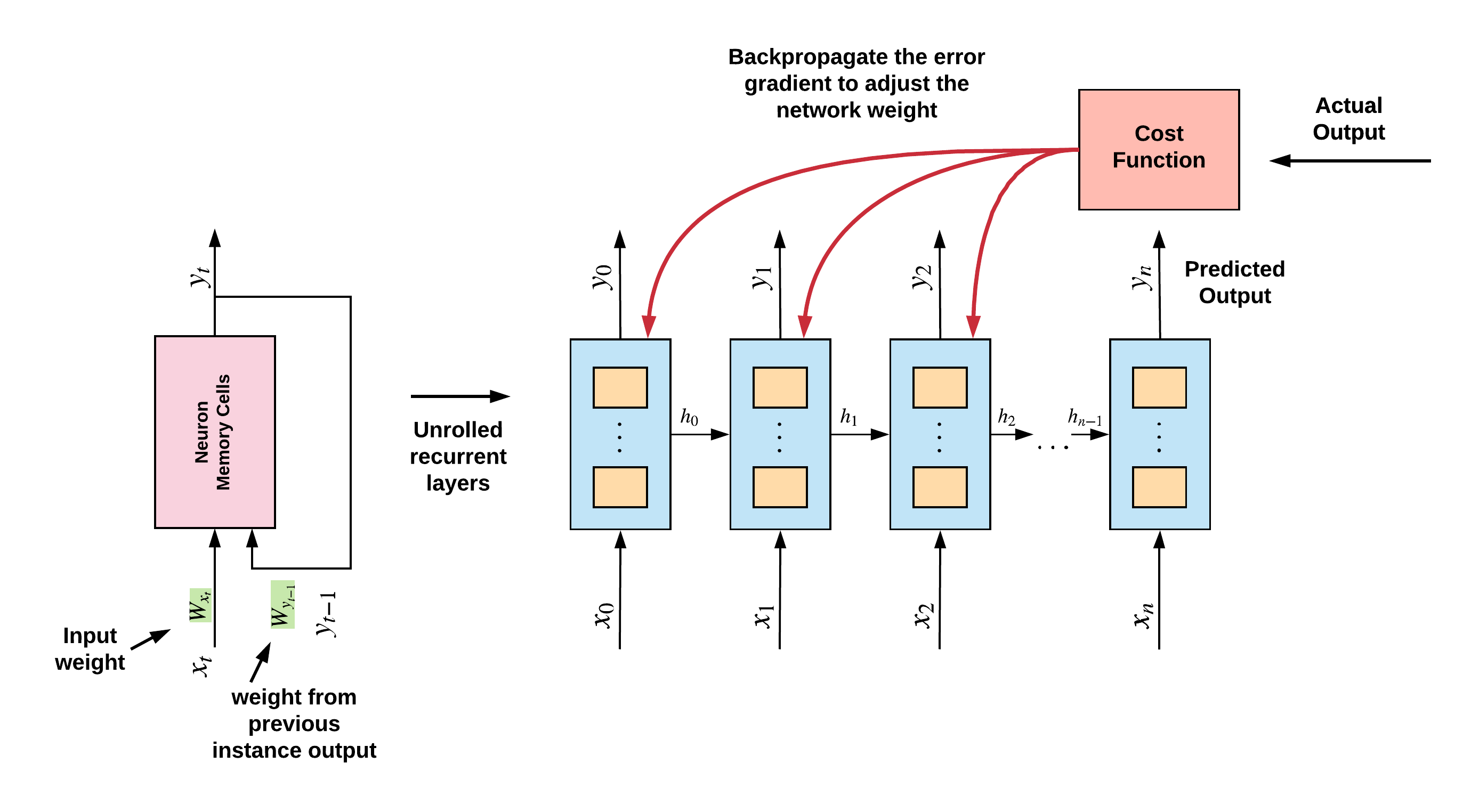 A significant challenge of training the Recurrent neural network is the vanishing and exploding gradient problem. When training a deep recurrent network for many layers of time instances, calculating the gradients of the weights of the neurons can become very volatile. When this happens, the value of the gradient can become extremely large tending to infinity, or they become tiny, all the way to zero. When this happens, the neurons become dead, and cannot train or learn any new information further. This effect is called the exploding and vanishing gradient problem.

The exploding and vanishing gradient problem is most prevalent in Recurrent Neural Networks because of the long-term dependencies or time instance of the unrolled recurrent neuron. A proposed alternative technique for mitigating this problem in Recurrent networks (in addition to other discussed methods such as Gradient clipping, Batch Normalization and using a non-saturating activation function such as ReLu), is to discard early time instances or time instances in the distant past. This technique is called Truncated Backpropagation Through Time (BPTT).

However, BPTT suffers a major drawback, and this is that some problems rely heavily on long-term dependencies to be able to make a prediction. A typical example is in language modelling where the long-term sequence of words in the past is vital in predicting the next word in the sequence.

The short-coming of BPTT and the need to deal with the problem of exploding and vanishing gradients led to the development of a memory cell called the Long-Short Term Memory or LSTM for short, which can store the long-term information of the problem in the memory cell of the recurrent network.

LSTM is very efficient for capturing the long-term dependencies across a large number of time instances. It does this by having a slightly more sophisticated cell than the basic recurrent units. The components of the LSTM are the:

These extra components enable the RNN to remember and store important events from the distant past. The LSTM takes as input, the previous cell state, the previous hidden state, and the current input, . To keep in line with the simplicity of this material, we provide a high-level illustration of the LSTM cell showing how the extra components of the cell come together. 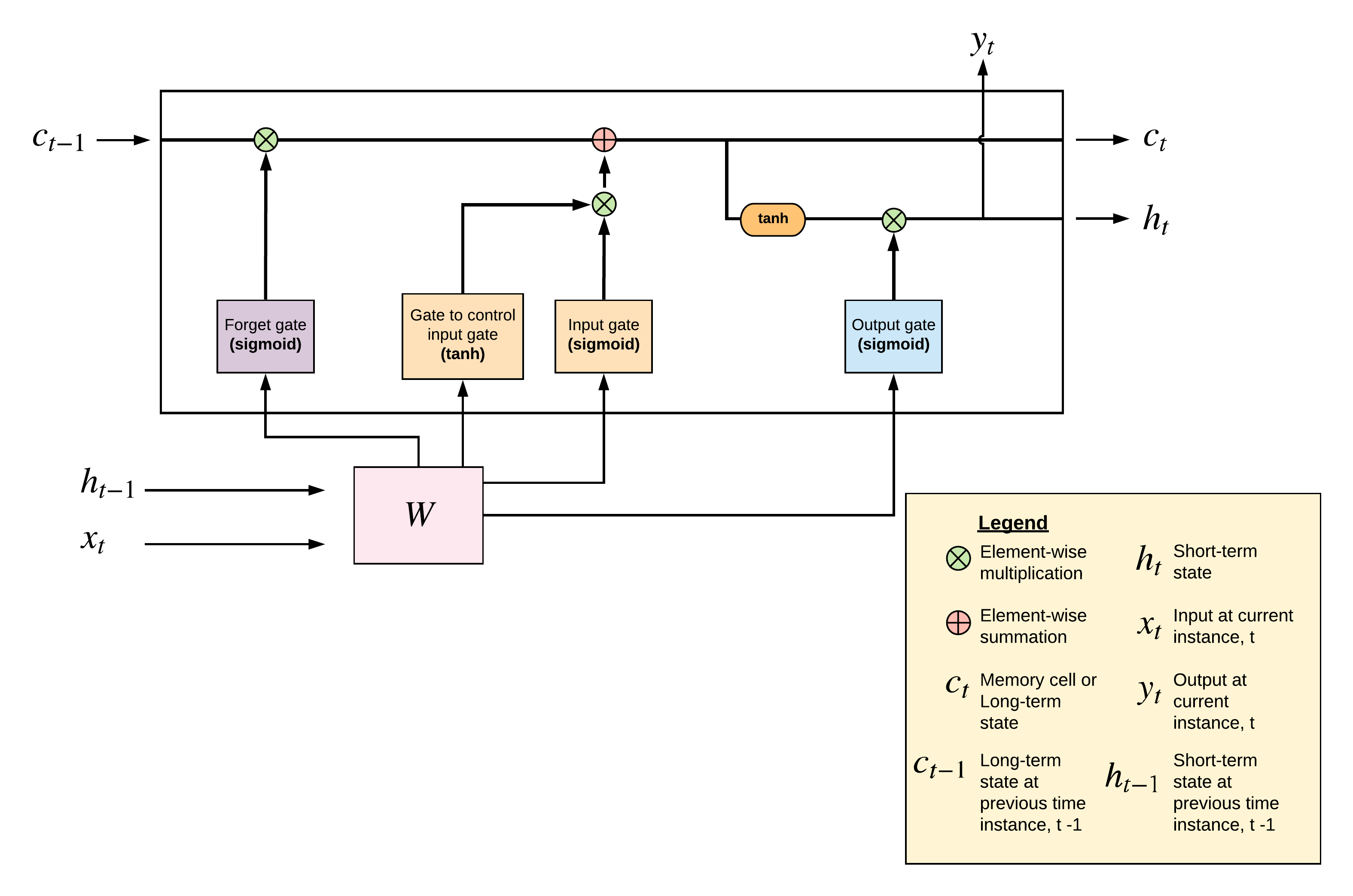 The illustration in Figure 9 is the LSTM memory cell. The components of the LSTM cell serve distinct functions in preserving long-term dependencies in sequence data. Let’s go through them.

It is important to note that the components of the LSTM cells are all Fully-Connected Neural Networks. There exist other variants of Recurrent Networks with memory cells, two of such are the peephole connections and the Gated Recurrent Units.